In order to monitor the ion channel activity or MucilAir™, Ussing chambers could be used. Using different experimental diagrams, one could assess the effects of drugs on various ion channels.

The epithelial sodium channel (ENaC) is a membrane-bound ion-channel that is permeable to Li+-ions, protons, and especially Na+-ions. It is a constitutively active ion-channel, sensitive to Amiloride. ENaC is located in the apical membrane of polarized epithelial cells such as airway epithelium, which is essential for optimizing ASL volume and for effective muco-ciliary clearance of the lung. In cystic fibrosis, the absence of these CFTR functions is predicted to result in increased Na+ and water (volume) absorption, depletion of ASL volume, impaired mechanical clearance of mucus, and infection. One possible strategy for treating cystic fibrosis is to block the ENaC activity. MucilAir™ and MucilAir™-CF could be used for testing the drugs effect on ENaC activity. 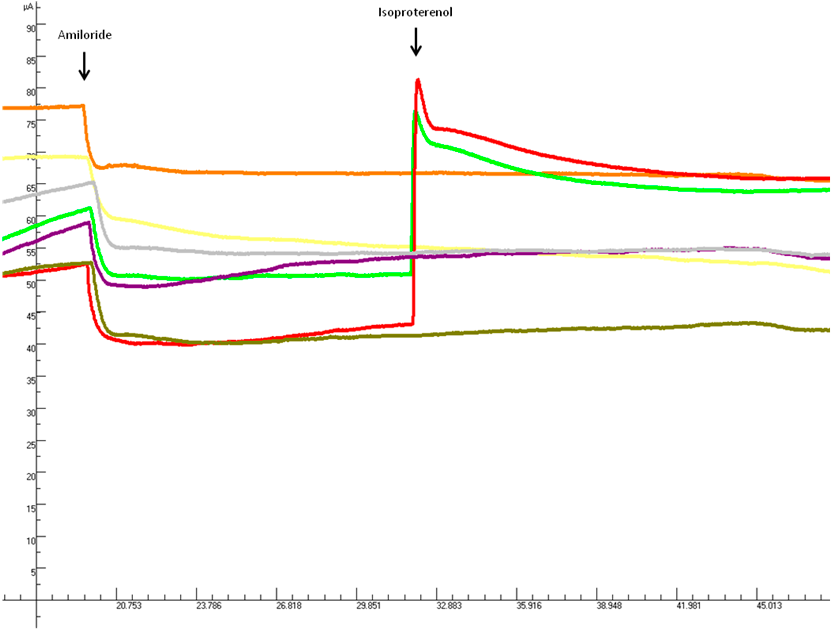 Ussing chamber measurement of the ENaC activity using MucilAir™ Pool : a mixture of cells from 14 donors. The eight curves represent the same protocol except for two of them, for which isoproterenol was added.

Evaluation of CFTR activity for CF

Cystic ﬁbrosis (CF) is an autosomal recessive multisystem disorder, characterized primarily by defective electrolyte transport in epithelial cells and abnormally viscid mucus secretions from glands and mucus epithelia. The mutated CTFR, such as Delta-F508, is often trapped inside the cells and display low permeability to Cl- ions. New drugs have being developed to bring the mutated CFTR to the apical membrane and restore its function. MucilAir™ and MucilAir™-CF could be used for testing the drugs effect on mutated CTFR activity. Depending on the target/effect of the drugs, three classes of drugs can be distinguished: corrector, activator, and potentiator.

The above diagram depicts normal airway epithelial ion transport, dysfunctional transport in CF.
Normal airway epithelia (left): CFTR functions as a Cl- transporter and it also regulates Na+ absorption (it inhibits ENaC). The quantity of NaCl on airway surface is optimally regulated to osmotically hydrate the periciliary and mucus layers allowing efficient mucus clearance.
CF airway epithelia (right): in the absence of the CFTR protein in the apical membrane consequent to common CF mutations, such as ΔF508 CFTR, the CF epithelium can exhibit unrestrained Na+ absorption and a failure to secrete Cl-. These combined defects reduce the quantity of NaCl on CF airway surfaces, maintain less water osmotically on CF airway surfaces and, hence, lead to depletion of water in the periciliary liquid layer (PCL) and collapse of a thickened mucus layer onto the epithelial surface.